Survival weapons are a necessity for anyone out in the wilderness. They are extremely helpful in many avenues of bushcraft, from use in hunting (such as crossbows) and gutting animals, to creating shelters from the local bush and saplings. They are indispensable. But which survival weapon is the best for the outdoors? We explore a few different types of weapons that all merit a place in our arsenal, but which is the best? 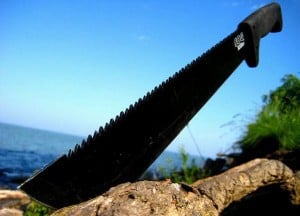 The machete has long been a classic survival tool. It is defined by its huge blade, which can be used as an incredibly deadly weapon if a dangerous situation arises. However, that is not its only function. Many machetes can also be used for other applications making them multi-purposeful and thus more worthy of the title of the best survival weapon. Let’s have a look at them in greater detail now.

In general, most of the advantages that are experienced with the machete can be replicated using smaller tools, making it rather unnecessary in some cases because it is a lot more cumbersome to carry about and work with. Having said that, the machete is an awesome survival weapon and will definitely always have a place with the rest of my bushcraft equipment. It is essentially a multi-purpose weapon that makes you look badass, a winner if you ask me!

The best survival machete, in my eyes, is the Kershaw 1076, due to its fantastic weighting and extremely strong blade.

I have grouped axes and hatchets together because they are very similar. They both have heavy iron heads and a wooden handle most of the time. The differences between the two lie in the fact that axes tend to be larger and heavier, requiring more strength and effort to wield, but in turn producing greater desired results. Survival hatchets are smaller, requiring only one hand to use. They tend to be employed for cutting bush and shrub, and some smaller trees. Sometimes they have a hammer on the back to make them even more useful. However, the function of the two are very similar in that they have a long(ish) handle and a heavy head making them good for strong blows.

I would say that in general axes and hatchets are less popular choices of survival weapons. In my opinion though there is no good reason for this. Such tools exhibits great advantages and can be used in many different situations.

Axes are awesome tools, and definitely very useful in a lot of situations. Our favourite has got to be the Gerber Gator Axe II Saw Combo which combines a fantastic axe with a saw which sits inside the handle.

So which is the best survival weapon? It really depends on your situation. For example, if you are already carrying a lot of stuff then it makes more sense to go with the lighter machete. This would probably also be the best choice for an environment like the rainforest because they are ideal for clearing brush. On the other hand, some situations require the ability to create shelters out of larger trees, in which case an axe or hatchet would be the best choice. As with most of the decisions for the best survival gear, it really depends on your situation, meaning that the best thing to do is prepare beforehand having research your environment.