I used to think that a high caliber hunting rifle is all the safety one needs in the wild, but after watching The Revenant’s depiction of a bear attack in which Leo Dicaprio, portraying a skilled hunter, gets viciously mauled without even having a chance of shooting his rifle, I decided to do some research – and sure enough, I discovered bear spray.


This is a product that uses the same ingredients and principle as pepper spray to repel/deter bears – whether they’re grizzlies, black bears or some other kind – from attacking you in the wild. Its main purpose is to force the animal to retreat, rather than kill it, giving the would-be victim enough time to escape and make it to safety.


Realizing that there may be many amateur adventurers like myself who haven’t come across this product before, I’ve created this guide to help you in choosing the best bear spray and also how to properly use it, so you can be as safe as possible in the Great Outdoors.

How Does Bear Spray Work? 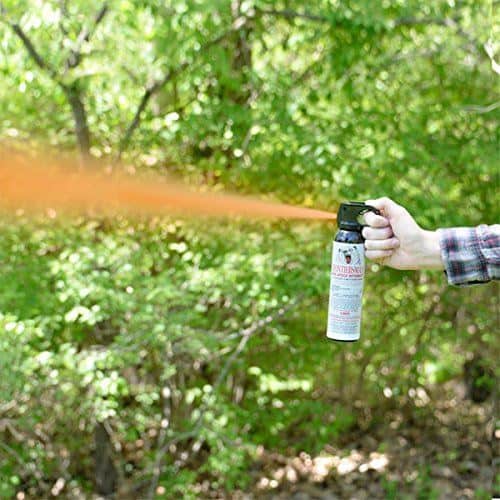 Bear repellent works by shooting bursts of atomized capsaicin (a derivative of cayenne pepper) through an aerosol can, as far as eight meters (though its effectiveness decreases with distance). It results in swelling of the beast’s eye, nose and lung membranes which causes it to experience total blindness (temporarily), as well as considerable breathing difficulty. Mostly, this forces the omnivore to blunder out of your vicinity, so you’ve got an opportunity to retreat.

What Is In Bear Spray?

Remember that bear sprays and regular pepper sprays are not the same – even though both are derived from oleoresin capsicum. The reason for this is that bear deterrent uses capsaicin and related capsaicinoids as the key ingredient. If you see a large can touting an oleoresin capsicum composition of 10, 20 or 30 percent, it is not bear spray – its regular pepper spray that will be useless against a bear.

You should keep the following factors in mind when looking for a top rated bear spray product: 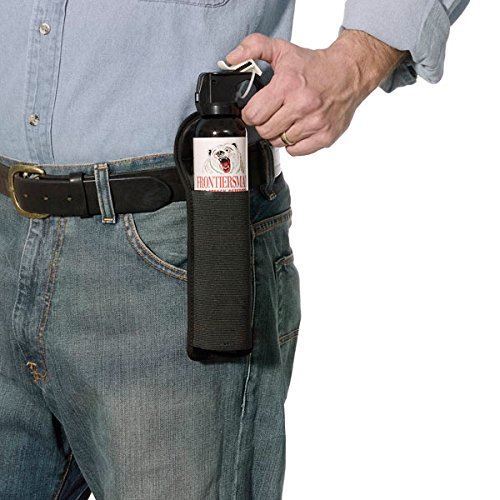 How To Use Bear Spray Properly?

After interviewing several professional wildlife and bear encounter specialists, the Center for Wildlife Information gave the following recommendations regarding the use of bear deterrent: 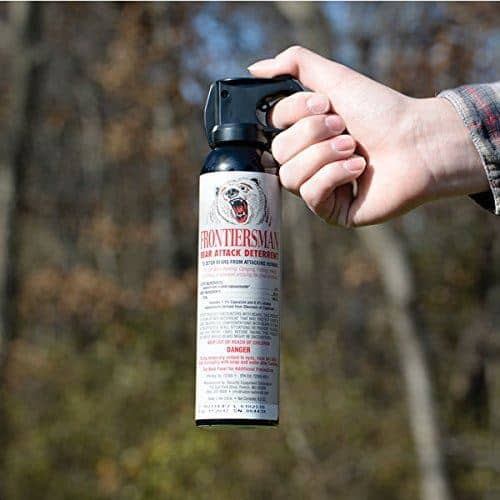 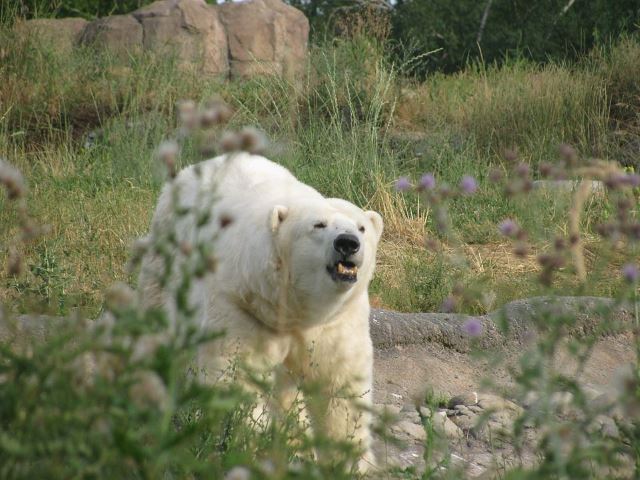 Other recommendations (not from the Center for Wildlife Information) include compensating for wind speed and direction, aiming slightly above the bear’s head when it is away to compensate for gravity, and aiming directly at the face when / if it rushes close. Once the bear has been deterred, exit the area as quickly as you can, but avoid running, since you could trip due to carelessness or anxiety and hurt yourself. 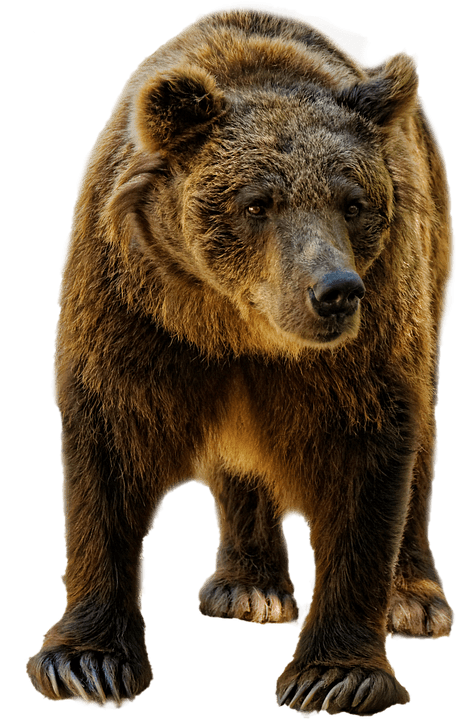 Also, bear in mind (no pun intended) that pepper spray should be considered a last line of defense. When backpacking in the wilds, you must use common sense and precautions to avoid getting into confrontations with wild animals.

When To Replace Your Bear Spray Product?

There can be nothing more dangerous than carrying around a compromised bear spray product in the wild, unknowingly. This is the equivalent of trying to defend yourself against a wild beast using a gun… that has blanks loaded in it instead of live rounds! Needless to say, the results can be disastrous. Here’s when you should replace your bear deterrent: 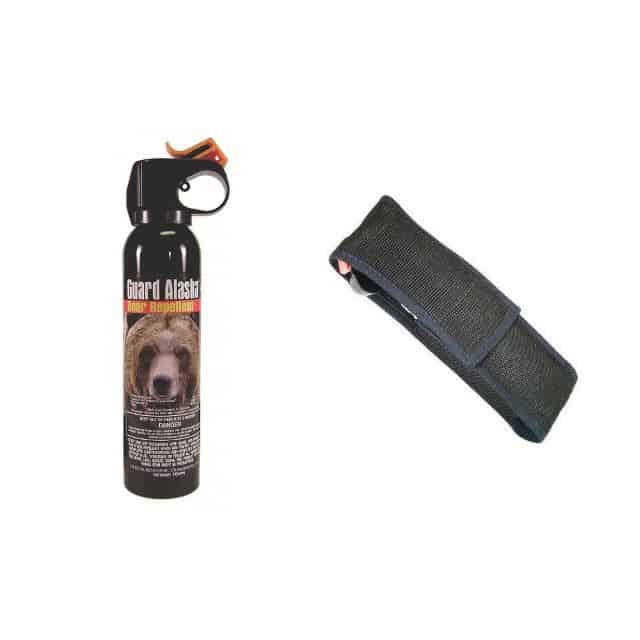 Claiming to be the sole EPA approved bear repellent for all species of bears, the Guard Alaska Bear Spray has been rigidly tested in the Alaskan wilds to ensure its effectiveness. Its fogger delivery system covers the bear’s face in 9 ounces of 1.34% total capsaicinoid formula in 9 seconds, while this may not be the strongest bear repellent, it definitely exceeds the 1% minimum stipulation by the EPA.

The 15-20 feet delivery range is above the recommended minimum, but it isn’t as much as some other competitors. The manufacturer, Personal Safety Corporation, guarantee a 4 year shelf life, however, some users have had problems with discharges and leaks – something that is a serious drawback for a product that you’re supposed to count on in the wild.

Furthermore, the manufacturer offers a 30 day money back guarantee, which is impressive but a bit ironic given how for anyone who found the product defective against a bear, getting a refund would be the least of their concerns! Still, it is reassuring to see that the manufacturer has trust in the performance of their product. 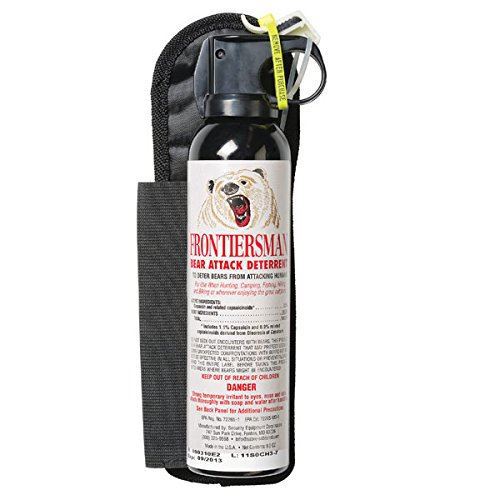 Strictly adhering to the requirements set out by the EPA, the Frontiersman Bear Spray matches the upper limit of major capsaicinoid strength (2.0%), making it one of the most effective bear sprays out there. It is also the only 9.2 ounce canister capable of achieving a 35 feet firing range, something that provides a greater window of reaction against a charging bear capable of covering 30+ feet/sec. The free holster that comes with it enables the user to fluidly fire the spray from the hip for dealing with sudden attacks in the woods.

What I really like about this product is that it has been tested for its bear deterring capability at both Brown Bear Resources in Missoula, Montana, and at Elmendorf AFB in Elmendorf, Alaska, with consistently positive results. The manufacturer also offers an exclusive HLPC guarantee of quality which means that you don’t have to worry about the spray failing in the heat of things because it came from a weak batch – a problem faced by many other products in the market.

However, a notable drawback is that it delivers 1.84 oz. per second, which means it empties in 5 seconds, which is less than the minimum recommendation of 6 seconds by the experts.

On the consumer satisfaction end of things, the majority of users were full of praise about its effectiveness – with some pretty unique stories about how it saved their lives / prevented serious injury. There were a couple of complaints about its build quality, but not significant enough to imply a serious design flaw. This one is definitely a strong candidate for the best bear spray on the market. 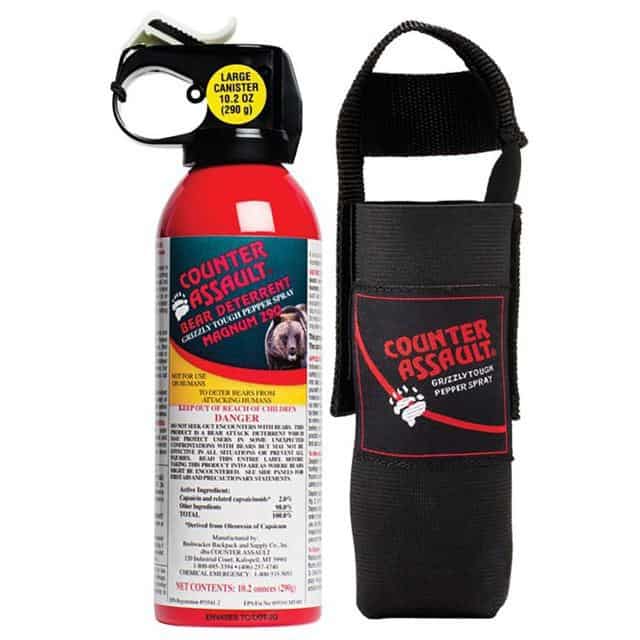 Another fine candidate for the best bear deterrent title, this offering from counter assault also features a major capsaicinoid strength of 2.0%, and achieves a 12 to 32 ft. spraying range. Its 9.2 second spraying is what gives it the edge over the Frontiersman bear spray, since it allows for the creation of a lasting fog cloud to serve as a barrier against the charging bear, and also makes it reusable in case of another attack.

The Counter Assault spray also features a safety cap which minimizes the risk of accidental discharges, and indirectly enhances its lifetime. It also comes with a free holster, but some users have found it too tight for taking the spray out quickly.

In terms of pure performance however, the Counter Assault goes above and beyond, with an actual account of how it saved a couple from a sow grizzly attack on the Peters Creek Trail in Chugach State Park, Alaska being widely circulated online. 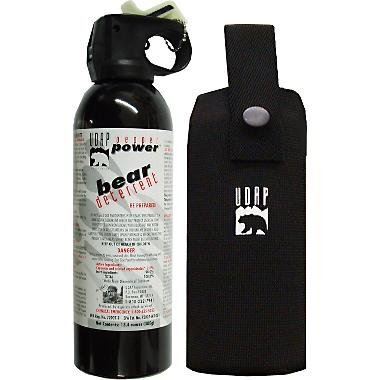 The Super Magnum Bear Spray, with its 13.4 ounce quantity, is the largest EPA registered bear deterrent spray available in the market right now. Its 2.0% major capsaicinoid concentration enables it to join the ranks of other strongest bear sprays, and it has been engineered to deliver a dense fiery fog to shield you from a bear attack from as far as 35 feet. However, this is also means that it is more expensive and it runs out in 7 seconds, which is a bit low compared to the competition.

While the product has received praise from users for its effectiveness in actual encounters against bears and other wild animals, a serious issue with its design was also raised by one – the trigger is made in a way that prevents firing in bursts easily – once you press the trigger down, it must be depressed manually to cut off the spray, something which is difficult in an actual encounter.

As such, this repellent spray appears to be designed as a one-in-the-chamber deal. This is a real turn-off considering its large size which would have made it an ideal weapon for sustained defense against wild animal attacks. 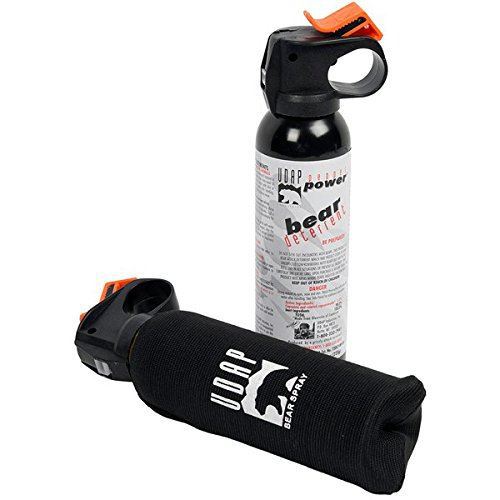 UDAP’s 12HP bear spray belies its seemingly humble size of 7.9 ounces with a 2.0% CRC strength and a commendable range of 30 feet. Its glow in the dark safety clip reduces the risk of accidental discharge. As with the larger UDAP 18HP, this product has been designed to optimally fire a strong single shot to deter a bear at once, which is why it only lasts 4 seconds.

In real life though, according to one consumer, the spray has proven to be surprisingly long lasting in spite of its short spray duration against multiple bears in the Alaskan Wilderness. The trigger with this one, too, isn’t very burst fire friendly – it takes some time to get accustomed to its manual triggering mechanism.

All EPA approved bear deterrent products offer a satisfactory degree of protection against bear attacks and are similarly priced, as you will have observed in the product reviews above. What sets a product apart from the others is the duration and range for which it provides this protection, and how reliably it manages to do so.

With that in mind, the 10.2 oz. Counter Assault Bear Deterrent is the best bear spray in the market right now, with its 2.0% CRC strength (the maximum stipulated by EPA) packing a major punch, its 32 ft. range enabling the operator to stop a charging bear at a safe distance, and its commendably long 9.2 second spraying duration allowing for defense in multiple encounters.